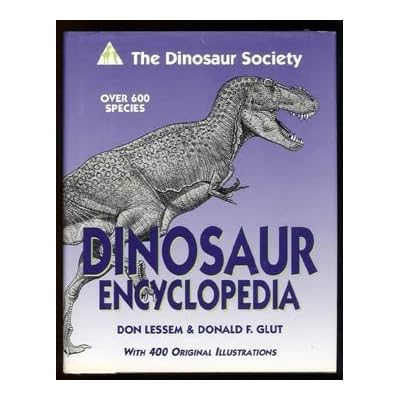 From Booklist Written for children ages 10 and up, as well as for adults, this book is a popular guide to the more than 600 known dinosaurs. It was authored by two well-known science writers; Lessem is founder of the Dinosaur Society, an international organization devoted to furthering paleontological education and research; Glut is a lecturer and author of numerous books on dinosaurs. More than 400 drawings by scientific illustrators complement the text.The authors state that a new dinosaur species is discovered somewhere in the world every seven weeks. They want to dispel myths about dinosaurs, such as that they all were sluggish, large, and biological failures. Features of this volume include a simplified time line of geological eras on the inside covers. This introduces the teal color used throughout in striking ways to offset dinosaur names or serve as a backdrop for line drawings. A discussion of the classification of dinosaurs at the order and family level is followed by a list of some genera no longer considered to be dinosaurs. Here the reader is treated to a behind-the-scenes view of the key problems of biological classification or taxonomy. A glossary defines terms such as geological periods and characteristics such as finback or frills. While younger readers might find the discussion of the International Code of Zoological Nomenclature difficult, the glossary presents a simplified picture of dinosaur characteristics, including classification.Each entry is arranged alphabetically by genus and gives pronunciation, species, order, suborder, family, name origin (such as the Latinized name of the discoverer), size, period, place, and diet. Most entries contain further explanatory paragraphs that note the type and number of skeleton fragments that have been identified. Question marks and words such as doubtful or invalid indicate questions or misnamings. A drawing is provided if enough of the dinosaur has been found to warrant one. Not all entries give the year of discovery of the dinosaur, and this omission is not explained. Access to the text is made easier by indexes of the dinosaurs by geological period and place.This is an important contribution to dinosauria literature. Its honesty in detailing the continuing mysteries surrounding dinosaurs is helpful in a time when museums, movies, and books such as The Ultimate Dinosaur (1993) by David Lambert, a renowned dinosaur scholar/writer, seem to be striving for a polished, complete look and when younger children have been subjected to the 'Barneyization' of dinosaurs. The Dinosaur Society's Dinosaur Encyclopedia has come along just in time to contradict misleading information and point out the ongoing research needed to find and fit together dinosaur fragments. This source is highly recommended for public and school libraries. Read more From the Inside Flap The president and founder of The Dinosaur Society teams up with the author of The Complete Dinosaur Dictionary to offer the ultimate guide for students, kids, parents, and dinosaur enthusiasts of every stripe. More than 600 species are described, along with information about appearance and behavior. 400 drawings. Read more

The Garden Interior: A Year of Inspired Beauty

Good Natured: The Origins of Right and Wrong in Humans and Other Animals